Does Barack Obama have leadership qualities of John F. Kennedy or Abe Lincoln? 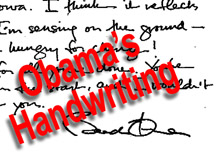 Republicans might not like the mostly positive personality reviews written by Baggett at his website of Mr. Obama, www.HandwritingUniversity.com. However, Baggett defends his analysis as “I’m just writing the personality traits as the writing dictates. Any one of my thousands of “Certified” students worldwide would have extracted the same personality traits from this sample of handwriting. I do admit that a cluster of “strong and likeable” personality traits does not always prove to be a great president. But, based on my research the character traits Mr. Obama’s handwriting displays is typical of world renown corporate and political leaders throughout history.

Mr. Baggett has been unable to get a full handwritten note from Senator John McCain to properly compare the candidate’s leadership qualities. “I don’t think comparing just signatures is really enough writing to be accurate, truly insightful, and comprehensive. When approached with the proven system we teach, graphology is a scientific based personality tool that can be incredibly useful in business, politics, and even relationships. Why minimize it by analyzing just a signature?” So, Baggett is still waiting for someone to come forward with a full page of handwriting from Mr. McCain.

So, is Obama’s handwriting really a glowing example of leadership and charisma?

The only trait Mr. Obama’s writing falls short on is the infamous high and long t-bar revealing a high self-esteem and visionary thinker. Baggett’s best-selling book “The Success Secrets of the Rich and Happy” (Empress Publishing, $17.95) states that the height of the t-bar is one highly dependable indicator of a person’s healthy self-esteem and ability to plan ahead with vision. (See John. F. Kennedy’s autograph and note his long and high t-bar.)

The book also goes on to state the absence of any single handwriting stroke does not mean the person does not necessarily have elements of that character trait … esteem can come in many places in the writing. Mr. Obama has confidence and a healthy ego… as shown in his large beginning letters of his autograph. So, we aren’t sure of his esteem from his letter t, alone.

Baggett says this about Obama’s letter t, “Obama has a preponderance of the character trait persistence and the fluidity of thinking (letters connecting into other letters). These two traits appear in the same location as the typical “esteem” stroke in the crossbar of the letter t. Therefore, it is difficult to say his esteem is low or high… he just has so much fluidity of thinking (ability to weave words and speak eloquently) … we have to look elsewhere to confirm his level of esteem. Based on the t-bar alone, the esteem would be called average… but professional handwriting analysts don’t judge by just one stroke alone… indicators in the rest of handwriting indicate an above average level of confidence and self-esteem.”

You can judge for yourself at http://handwritinguniversity.com/

Bart Baggett is one of the world’s top court qualified handwriting experts. He is president of Handwriting University, which has students in over 17 countries and campuses in the USA, India, and Taiwan. He is a frequent guest on such TV networks as Court TV, CNN, and Fox News. He has even successfully survived appearances on the Howard Stern Show and VH1’s ” I Love New York”.

Baggett lives in Los Angeles and is a faculty member of the International School of Forensic Document Examination. (A distance learning school which trains handwriting experts worldwide. htttp://internationalschool.us )