“When you need a professional handwriting expert of the highest standards, hire Bart Baggett. He is honest, quick, direct… and will deliver an objective expert opinion, every time.  I recommend him without hesitation.” 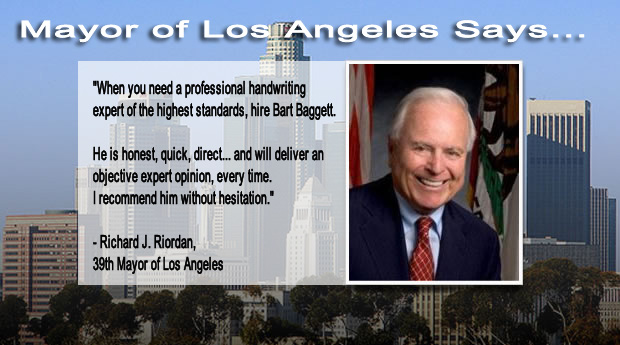 Baggett helps attorney in third case for his firm.

“Thanks to Mr. Baggett’s written opinion, my client’s case settle in our favor for a small amount. . Mr. Baggett’s reputation and letter saved my client thousands on a trial. “ 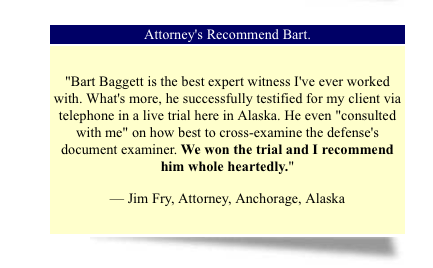 “The fact that you were here, in the court, to prove my x-husband forged the pre-nuptial agreement was the key to my divorce case. I can’t thank you enough. You’ve help end this horrible 2 year drama of lies and created justice for me.” 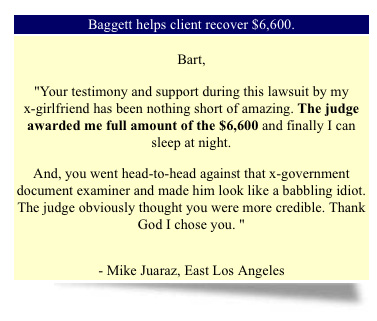 “Your testimony and support during this lawsuit by my x-girlfriend has been nothing short of amazing. The judge awarded me full amount of the $6,600 and finally I can sleep at night.

And, you went head-to-head against that x-government document examiner and made him look like a babbling idiot. The judge obviously thought you were more credible. Thank God I chose you. “

“Thanks you soooooo much for going above and beyond. Your testimony was the key the criminal lawsuit against me. The jury found me NOT GUILTY on all counts. They obviously believed you instead of that Police document examiner the D.A. hired.

I was so impressed you handled that District Attorney with such professionalism… he knew you were right, but couldn’t make you look bad on the witness stand.

I have my life back. Thank you Mr. Baggett!”

“Bart Baggett is the best expert witness I’ve ever worked with. What’s more, he successfully testified for my client via telephone in a live trial here in Alaska. He even “consulted with me” on how best to cross-examine the defense’s document examiner. We won the trial and I recommend him whole heartedly.”

Even when Bart isn’t in the room,  his reputation helps client win

“Thank you very much for your assistance in this matter. Your opinion letter may become enough to prevent a trial.”

Just an FYI. We won our case in small claims court (Balboa Capital vs. San Dollar Mortgage Service, Inc) . The judge accepted your “Official Letter of Opinion” in lui of a live testimony and he believed your opinion was credible. Should Mr. Baggett want to use our case for testimonial, feel free to do so. Thanks to you and Bart for efficient service!!!”